So, after five crazy years of the wildest ride in comics or science fiction journalism, our heroes – and for that matter, our villains – have been out of the game for another five years. So, where are they now?

Former US President Gary Callahan is still in prison. Admittedly, it’s a country club with fairly low security, but still, he is being raped by, well, pretty much anyone who can pay the single cigarette it costs. He is especially popular with the small group of Transients who are prisoners.

The Beast, on the other hand, is not in prison. He’s on the lecture circuit, although so far as most people in the audience are concerned, it’s more like the stand up comedy circuit. Which doesn’t thrill the Beast, but the thought of poverty thrills him even less. 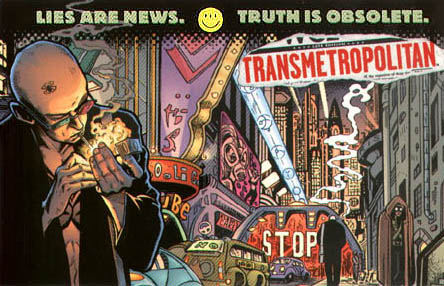 Mitchell Royce, Two-Fisted Editor, is now one of the most influential media men in the City. His championing of Spider’s work in the past – and the work of Channon and Yelena since then – has seen his star rise. He still edits – he wouldn’t know what to do himself if he didn’t – but he’s now moving up the corporate ranks, as well.

Lau Qi and John Nkrumah, proprietors of the Hole, are still in business, although the initial burst of success and attention, they haven’t really had a lot of material of the same calibre as Spider’s work, and readership is dropping off – although they’re still more than triple the level they were at before Spider.

Fred Christ died as he lived: pointlessly. No one misses him.

Detective Malandra Newton has been promoted, and is now Chief in the Dante Street Precinct. However, she’s finding police work increasingly unsatisfying, and starting to think about a career in politics. Being the first Presdient ever to have arrested a predecessor has a certain appeal to her.

Robert McX was eventually cured of his horrifying venereal infection.
The cure is worse than the disease.

Channon Yarrow is happy producing long form journalism. She writes a good long essay once a quarter or so, and they get published as books once a year or so, and it’s a comfortable life for her. She has recently started dating again, but there’s no one special.

Yelena Rossini is more manic than ever. She divides her time between the City and Spider’s compound, writing furiously in the former, editing in the latter. She’s still sleeping with Spider, and she’s taken the liberty of preserving some of his sperm: when he dies, and not before, she’ll have his baby.

Spider Jerusalem is enjoying his retirement. Aside from former filthy assistants and editors, he has few visitors, although Oscar Rossini and he have formed a fast friendship, and Tico Cortez appears to be making progress in persuading him to upload one day.
Occasionally, when he gets bored, he calls talk shows…