Now that winter has come and gone, you already know that the night is dark and full of spoilers – right up to the last episode. Read on at your viewing pleasure’s peril.

Back in Meereen, Daario Naharis gets the news about the death of his queen – and the defection of the Unsullied – some weeks after the fact. It leaves him in a quandary. He had been, in a leisurely fashion, pursuing the agenda that Daenerys left for him: keeping to peace in order to allow for the transfer of power in Meereen to the people. There’s two problems with that: no one knows what the latter looks like, because it’s never been tried; and the former is ultimately guaranteed by the threat of dragons. And now that’s not really a factor, all the tensions that the Queen’s power had kept in check come boiling up. Daario responds to this by sending the Second Sons out to keep the peace, which rapidly devolves into martial law. And that tense status quo lasts for years, until one day Daario wakes up to realise that he’s basically the King of Meereen, and starts thinking about what a more permanent government would look like. He thinks about what he has learned from some of the keener political minds he’s met, and before long, his informal motto is more or less “what would the dwarf do?” One day, he might even overcome his own pride enough to ask that directly – and that day may be sooner than later, if Meereen finds itself in need of the Six Kingdoms’ armies to maintain its independence.

Meanwhile, in Braavos, Tycho Nestoris is grimly coming to the realisation that he backed the wrong horse, and planning a trip back to King’s Landing as soon as possible to see if the new government of Bran the Broken will honour the debts of its predecessor – and if Davos Seaworth can be guilted into honouring the debts he and his once-king, Stannis Baratheon once incurred to the Iron Bank. He anticipates that there will be much, much verbal fencing with the new King’s Hand and Master of Coin, but even he underestimates just how much negotiating will be necessary. He is, however, quite confident that they will inevitably conclude that they cannot afford the displeasure of the world’s dominant financial institution.

On Naath, the remaining Unsullied, led as always by Grey Worm, get a chilly welcome at first, because the Naathi have gotten very used to being invaded by slavers. The Unsullied camp and try to make friends, but the Unsullied are soldiers, not diplomats. It’s not until actual slavers come, and the Unsullied send them packing, that they start to be welcomed. As successive slaver groups come, in ever larger numbers, and are repulsed once more by the Unsullied, they slowly become a part of the culture of Naath. Although they represent a few hundred men who cannot have children, the military academy they found makes the Naathi a much better defended people for centuries thereafter, and slavers eventually stop even attempting to raid there. Grey Worm himself is long dead by this point, having died while leading a reprisal mission against the slavers.

In Westeros, the Six Kingdoms are ruled wisely and well – if somewhat eccentrically – by Bran the Broken, the First of His Name, King of the Andals and the First Men, Lord of the Six Kingdoms, and Protector of the Realm, and his Small Council. Much thought is given to repopulating and rebuilding six kingdoms riven by war, where a generation of men have died and many homes, from the humblest to the greatest, now stand empty. 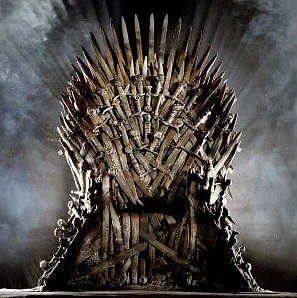 Bran, Samwell Tarly and Tyrion Lannister in particular go to great efforts to make sure that the men and women appointed to fill the empty places will be sympathetic to their goals (especially Sam, who seeks to encourage the formation of a democratic state in the longer term). Notably, they ennoble smallfolk wherever possible, and create new houses in preference to reviving old ones. They also do their best to discourage the practice of jousting, holding no royal tournaments during the reign of Bran and attending none held be lesser lords. Finally, they formalise the procedures whereby the new monarch will be elected after Bran abdicates, and make sure that they are well understood and respected by those who will have to follow them.

Gendry Baratheon is a rare exception to this, ennobled by Daenerys and left in place after her death. He eventually gets over Arya, marries and produces fine children, who grow to bear his house’s new coat of arms, a sable hammer and anvil upon a field of gold. Of all the Houses of Westeros, his is noted as the most loyal to the throne (in sharp contrast to the previous generation of Baratheons), and it seems only just and right when his eldest son eventually joins the Kingsguard.

Tyrion often finds that his role as head of the Small Council is to navigate a path between the idealism of Sam and Brienne of Tarth and the cynicism of Davos Seaworth and Bronn of the Blackwater. As time goes by, and the various council members settle into their new positions, this becomes less of an issue – Bronn in particular tends to exaggerate his position as much to play devil’s advocate as because he actually means it – and the Council, augmented by a Master of Whisperers and a Master of War, does some fine work in the years of relative peace following what becomes known as the Wars of the Last Winter.

Samwell Tarly, as Grand Maester, creates free schools for the smallfolk, so that they may learn to read, write and do basic mathematics more readily, a reform quickly copied in the North and adopted only after considerable resistance in Dorne. As towering an achievement as that is, forcing the Conclave of rather old and set-in-their-ways Archmaesters to open the Citadel to women is probably a greater one. In the end, the decisive argument that swung the vote was that there were things midwives knew that Maesters did not – and that midwives were unlikely to share this information with the Citadel under any other circumstances.

The team of Davos Seaworth and Bronn of the Blackwater becomes widely feared by the banks of Braavos, as they quickly gain a reputation as sharp negotiators who give away nothing. The navy of the Six Kingdoms is rebuilt more quickly – and more cheaply – than anyone expected.

Yara Greyjoy, Queen of the Iron Islands, and the Ironborn in general, are the most surprised by this – and even moreso when King Bran and his Hand make it very clear that they expect her to keep the promise she made to Daenerys to stop raiding the other Kingdoms. Fortunately for Yara, Sansa has a plan that will make the Ironborn’s transition from raiders to merchants considerably easier.

It is an open secret that Tyrion Lannister maintains a frequent correspondence with his former wife, Sansa Stark, First of Her Name and Queen in the North, as they each seek to build a more equitable world. They do not always agree (Tyrion worries more about class-based inequities, Sansa more about gender-based inequities) but they are both intelligent and open to admitting when they are wrong, at least to each other.

For her part, one of the first actions Sansa takes as Queen is to make the line of inheritance dependent solely on birth order, without regard to gender, and to make the position of the husband of the Queen (in her own right) that of Prince-Consort. She also encourages all her bannerfolk to arrange their inheritance similarly, and with some grumbling, the majority of them fall into line. Sansa becomes known, in time, as Sansa the Builder. Inspired by a stray reflection of Ser Davos, she calls for the digging of an immense canal across the Neck, entirely within the lands of the North, hiring engineers from the Free Cities and wherever else they can be found to design it and the three large bridges that span it. The tolls generated by merchant shipping passing through the canal – warships belonging to anywhere but the North are strictly forbidden – are predicted to eventually pay back the loan of the Iron Bank that funded it. That the new canal also creates a very defensible border between the Six Kingdoms and the North does not go unnoticed on either side, but with House Frey more or less destroyed, there are few to complain until it’s a fait-accompli.

Sansa also spends much time and effort rebuilding and repopulating the North, especially now that North extends so much further beyond the slowly melting Wall. She is very successful at encouraging immigration, both into the North itself and the new Northlands opening up beyond the Wall. Castle Black is allowed to fall into ruin, but Eastwatch-by-the-Sea and Deep Lake are rebuilt, while new settlements are founded beyond them. In time, the place where the Wall once stood becomes a major artery of transit, known as the Raven’s Road, and the Kingsroad that once terminated at the Wall extends first to White Tree, and then further North year by year. Unlike her brother, Sansa is far more willing to keep Northern Houses in the possession of their traditional families – not least because she realises that this sense of continuity matters a great deal in the face of all the other changes she is making. She also makes efforts to keep peace with most of the Wildling tribes near her new settlements, and to encourage trading relations with them. Most of them.

The Free Folk themselves are led, in a first among equals kind of way, by Tormund Giantsbane, who realises that without the unifying threat posed by the Night King, the Free Folk will fracture once more. While he sees this as a good thing, for the most part, there are elements of it that trouble him, and with the assistance of men sent by Sansa and the remains of the Night Watch, he spends a few seasons hunting down and killing every last Thenn, and attempts to keep cannibalism stamped out for good – insofar as he can without assuming the title of the King-Beyond-the-Wall.

Jon Snow participates in the Thenn War, but his heart isn’t in it. There is nothing much in the world that brings him joy anymore. After the Thenns are dealt with, he takes a single horse, and accompanied only by Ghost, travels ever northward. His final fate is unknown.

Drogon was last seen flying high over the streets of Pentos. His course appeared to be two or three degrees south of East, and he carried the corpse of Daenerys Targaryen in one mighty paw. His final landing place is unknown.

Arya Stark sailed west from Westeros, and legend has it that she still sails west, seeking the lands beyond the sunset, to this day.