Colonel James Forsyth of the US Cavalry led a force of approximately 500 soldiers into the Lakota camp at the Pine Ridge Indian Reservation on the morning of December 29, 1890. Their intent was to disarm the Lakota tribespeople there, as there was great concern among the European-descended American population that the Native American ‘Ghost Dance’ portended a revolutionary uprising.

Nothing could have been further from the truth, but after literally centuries of slaughtering, deceiving and cheating the native tribes, the American people and their government found it hard to believe that the Indian’s response could be anything other than violence. Tragically, due to the intransigence and fearfulness of Forsyth’s troop, as soon as a single shot was fired (apparently by accident), it became the signal to open fire without restraint or mercy.

Ninety men of the Lakota, and two hundred of their women and children were slaughtered in the ensuing violence, more than half the residents of the camp. Despite claims that the killings happened due to the chaos of battle (which does no doubt account for a good number of them), the fact that some women and children were pursued as far as two miles to be murdered by cavalrymen undermines the idea that this was just a misunderstanding. Twenty of the 500 cavalrymen were awarded the Medal of Honor for their deeds at Wounded Knee (compare this to a total of three Medals of Honor awarded among 64,000 South Dakotans who fought in World War Two).

The massacre is generally seen to mark the end of the American Indian Wars (although there were a few smaller incidents in the following weeks). Henceforth, the genocide of the Native Americans would be pursued by slower and subtler means. 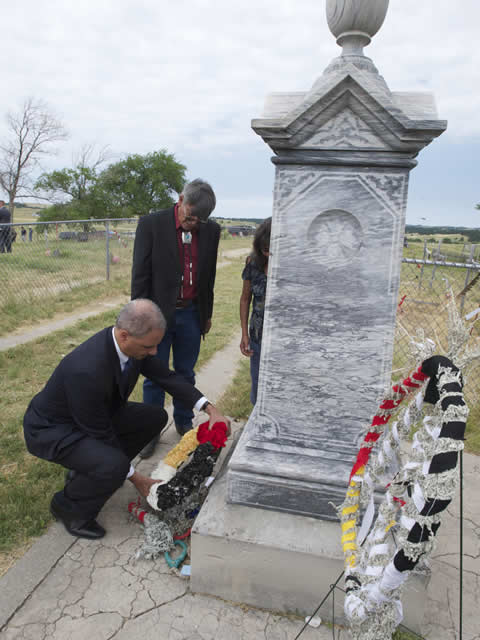 By US Department of Justice – http://www.justice.gov/css-gallery/gallery-pineridge.html#1, Public Domain, Link