The characters of Ferris Bueller’s Day Off seemed more or less happy when last we saw them – well okay, with the obvious exception of Ed Rooney, they were happy. But where are they now?

Ferris Bueller himself is in real estate. Still charismatic, but his good looks are fading, and that smug grin looks more than a little creepy on a man in his mid-forties. But he’s carved out a reasonable life for himself. A comfortable level of income, a nice wife and two kids in their suburban McMansion, and a never-ending stream of temp receptionists in the office when he fancies a bit on the side.

Cameron Frye eventually made peace with his father, although not before spending several years in an Alaskan military school, joining the army and serving in the first Gulf War. A gruffly friendly man, he’s tough, brave and has a heart of gold. And thanks to two decades of not asking and not telling, he’s kinda repressed, albeit in different ways from when we last saw him. 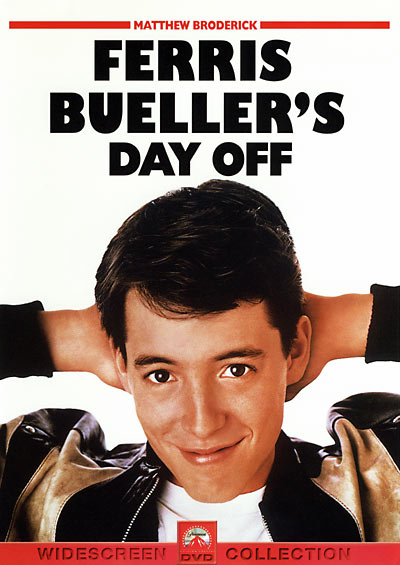 Sloane Peterson did in fact not marry Ferris. She went to college without any clear idea what she wanted to do, went through an experimental lipstick lesbian phase, and eventually moved to New York, where she rose through the ranks to become the editor of one of those interchangeable fashion magazines.

Jeannie Bueller graduated high school and went to Harvard, where she majored in political science. A staunch feminist and a stalwart of numerous progressive causes, she is a member of the Democratic Party. Currently, she holds the Illinois State Senate seat for the 13th District, and is thinking about running for the national Senate in 2012.

Simone Adamley is the brains behind GoodGossip.com, a web startup that aims to be the next Facebook.

Detective Steven Lim was killed in the line of duty during the gang war that broke out after the Gonzalez mob was broken a year after the events of the film.

Ferris and Cameron’s Economics Teacher eventually committed suicide by hanging himself in the men’s bathroom at Shermer High.

Edward Rooney, as every school child knows, is the President of the United States of America. A member of the Republican Party, he has reversed decades of GOP cuts to education funding, largely at the expense of health care and social security.