Widely hailed as one of the greatest rock songs of all time, and probably the greatest psychedelic rock song, “Purple Haze” is not actually about drugs, psychedelic or otherwise. According to Hendrix (who wrote the lyrics and music), it’s mostly about falling in love – although it’s possible that the whole song is happening on Neptune (Hendrix was a big science fiction fan, and frequently used elements of it in his songs). In fact, Hendrix gave different explanations at different times – although he always strenuously denied that it was about drug use.

), Hendrix began writing it on Boxing Day, 1966. “Purple Haze” was recorded in a four hour session on January 11, 1967 at De Lane Lea Studios in London, and released in the UK a little over two months later. (It would not be released in the US until June 19.) It would become a Top Ten hit in the UK and other European nations, but fare less well in the US, where strong sales of the album it featured on as track one (“Are You Experienced?”) harmed sales of the single despite heavy radio play.

It remains one of the most well known and popular Hendrix songs. 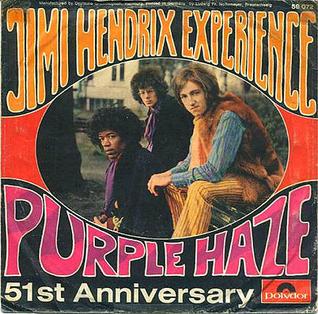 The End of the Line — The Travelling Wilburys