November 11, 1869 — “An Act to provide for the Protection and Management of the Aboriginal Natives of Victoria” is presented to the Victorian Parliament

The first legal attempt to codify the treatment of Australia’s indigenous peoples was largely an attempt to give the government more or less complete control over their lives. It was guided by Christian ideals, misunderstandings of Darwin’s theories and economic imperatives to varying degrees. It was, in modern terms, racist af.

It would be followed by similar laws in other states and territories, then federally. Until 1967, the native peoples of Australia were, legally speaking, defined as native fauna rather than humans.

The most infamous provision of the act was to allow for children – especially children who were not full-blooded natives – to be removed from their parents, so that they could be integrated into white society (as servants, of course) for their own good. The children removed – and this policy went on for decades, with removals still taking place more than a century after 1869 – would become known as the Stolen Generations. It was done in the name of a larger, predominately white society that had little or no idea it was happening until the early 1980’s.

In a colonial history as replete with shameful episodes as any other, this is one of the most shameful, and accordingly, the Prime Minister of Australia formally apologised for it in Parliament on February 13, 2008, and compensation has been paid to some of the victims and their families. Scant recompense for the pain caused, but better than nothing. 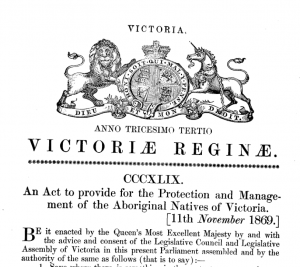 Took The Children Away — Archie Roach