It’s not clear exactly when Cain murdered Abel in any biblical chronology I’ve been able to find. Some of them even date it to 4004 BCE, the same year usually given for the Creation of the earth. Which implies that not only were Cain and Abel both full grown men in the space of a single year, but that their mother’s two pregnancies (Cain and Abel were not twins – Cain is the older), also took place in that same year.

Nevertheless, as brothers, they didn’t always get along. This may or may not have had something to do with the notoriously fickle and hard to please deity that they worshiped, or that deity’s changing of the rules on them – Cain presumably would not have made an offering that God (who is, according to the Gospel of Luke, Cain’s grandfather) that God found unacceptable had he known ahead of time that it would be rejected.

Cain responds to his rejection by God by hunting and killing his brother, Abel. (Which makes him sound a little older than >1 – about 16 or so, I would guess.) And then God, not done with the mind games, pretends not to know about it and questions Cain, leading to his infamous declaration that he was “not his brother’s keeper” (which is a rare concession to historical accuracy by the Book of Genesis – cricket had indeed not yet been invented). God curses Cain and exiles him, making him the earliest biblical figure to be set up and knocked down by God. 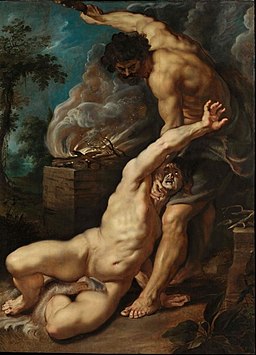 The Bastard Sons of Enoch — Shriekback