The highest-grossing and most well-known computer game of all time, Pac-Man was created by the Japanese company Namco. It first made an impact as an arcade game, but by the mid-eighties, it was available for purchase to use on home gaming consoles, and it has remained available on many gaming platforms ever since.

At the time, moral watchdogs worried about its effect on impressionable youth, but since hardly anyone who played it growing up went on to spend hours in dark surroundings listening to extremely repetitive electronic music while gobbling down a variety of pills, their concerns were clearly groundless. 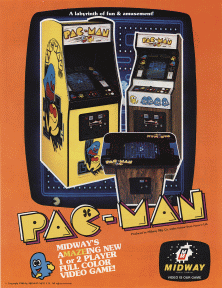 By May be found at the following website: The Arcade Flyer Archive, Fair use, Link