Ever since Roger Patterson and Robert Gimlin filmed a hairy humanoid at Bluff Creek, California, on October 20, 1967, people have been arguing about it.

Patterson was widely believed to be a con-man, and the odds of someone who was specifically looking for Bigfoot finding her are, let’s face it, long. And the blurry footage shows what could easily be some dude in a Star Trek alien costume. (Indeed, Janos Prohaska, costume designer for Star Trek, was among the most vocal skeptics.)

On the other hand, cryptozoologists like to point out the unusual gait of the bigfoot, which they claim is nothing like that of a human, or the fact that there had been sightings at Bluff Creek before this time – although the skeptics claim that as an argument for their side, too… 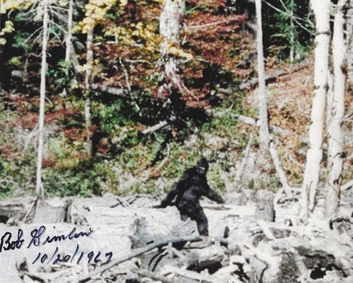 By Patterson-Gimlin film, Fair use, Link

Bluff Creek and Beyond — Pressurehed